The OG-V ultrafast pulse selector series have adjustable transmission gate time for selection of groups of adjacent pulses from a train of femtosecond pulses. 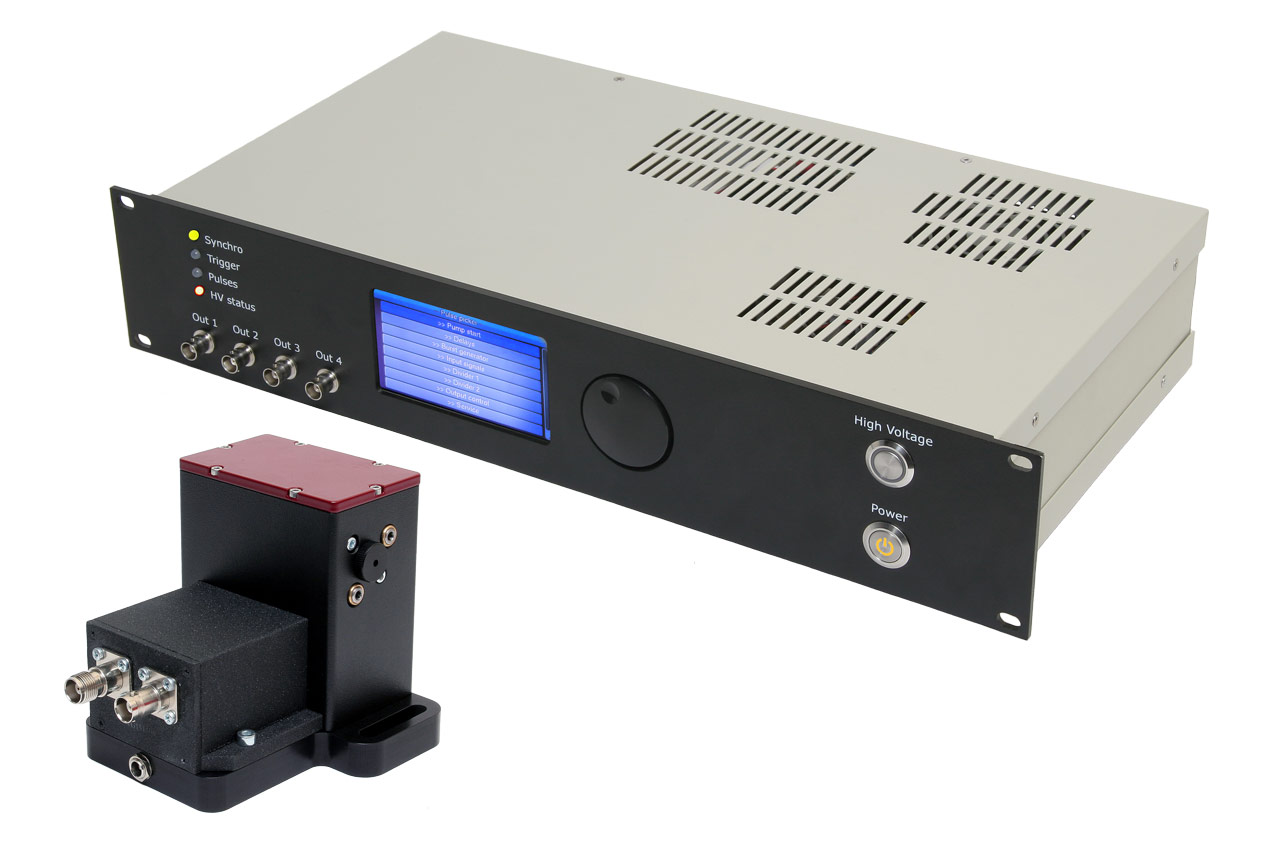 The OG-V series electrooptic pulse picker with its control unit 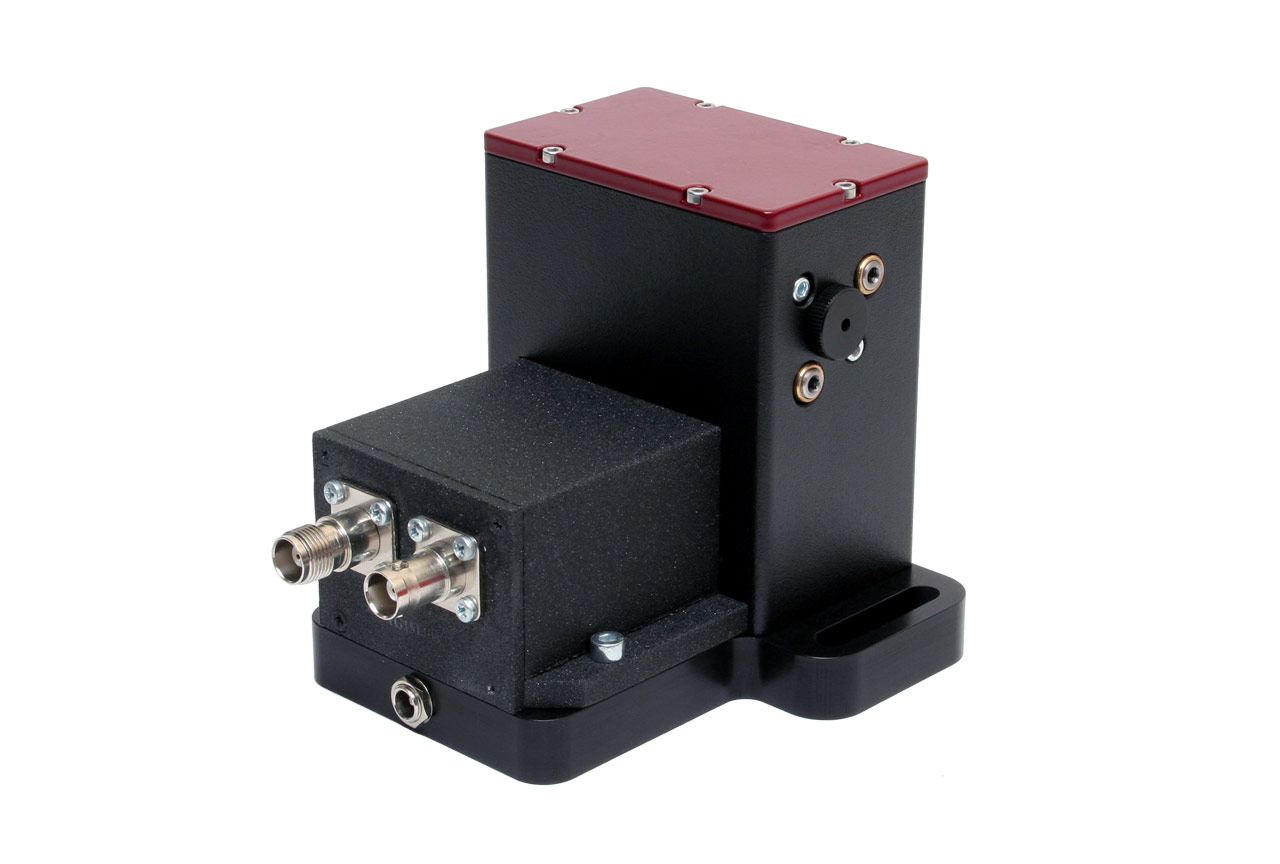 The following applications might be pointed out when using pulse pickers with adjustable transmission gate time with femtosecond and picosecond lasers:

- selection of groups of adjacent pulses (bursts) from a train of pulses;
- control of regenerative amplifier operation: injection of a seed pulse into a cavity and ejection of the amplified pulse out of the cavity;
- usage as optical shutters (fast optical modulators) and Q-switch cavity applications;
- selection of single laser pulses in case of high jitter in relation to electric trigger pulse.

The OG pulse picker consists of a certain optical setup and an electronic control and power supply unit.

Optical setup of a pulse picker comprises two crossed polarizers with a Pockels cell placed in between. Pulse selection is performed with the use of the Pockels effect — a quasi-rectangular high-voltage electric pulse induces birefringence in the Pockels cell's optical crystal allowing precise rotation of the polarization plane of a certain laser pulse or a group of adjacent laser pulses depending on the duration of the high-voltage pulse (transmission window). Then this or these pulses may be separated from a train of consecutive pulses by using a polarizer.

- external or internal trigger;
- synchronization to optical (built-in photodetector) or electric signal;
- two independent delay channel groups, each with its trigger and synchronization signals; spare channels may be used as general purpose delay channels for triggering other experimental equipment (e.g. oscilloscopes, pump lasers, streak-cameras etc.);
- additional control modes with triggering by edge/level of an external signal or via a built-in burst generator allow formation of various output pulse patterns;
- up to 4 synchronized Pockels cells may be driven by a single electronic control unit.

- multi-channel Pockels cell, i.e. a cell in which up to 4 high-voltage generators may be connected to a single optical crystal with adjustable delay between high-voltage pulses of each generator; such a cell may be used to select several closely placed pulses in a train of pulses or used as a single Pockels cell both for injection and ejection purposes in a regenerative amplifier setup.

- pulse pickers with two consecutive Pockels cells for suppression of depolarization at high average optical power ratings and increase of overall contrast ratio of the picker unit up to 50 dB;

- provision to install power supplies for additional Pockels cells (total number of cells per control unit depends on exact cell type) at time of purchase, but the additional cells themselves may be purchased later;

- optical setup may be combined onto a single optical breadboard with adjustable feet.

What is a "quarter-wave optical scheme" and when should it be used?

Even technical capabilities of modern high-voltage generators still have their performance limits as is the case with all equipment. In a number of cases reasonably obtainable high-voltage pulse amplitude is not sufficient to rotate the polarization plane 90° per single pass through an electro-optical crystal, as it happens in a simple half-wave scheme. A quarter-wave scheme provides one of the solutions to pick pulses with high voltage being 2 times lower than in the half-wave scheme. In this case the radiation passes through the electro-optic crystal twice, in forward and backward direction.

However, such a scheme is not void of disadvantages: the "idle" beam of unpicked pulses propagates backwards closely to the path of the incoming laser radiation and may influence or even damage the incoming optical pulse source. This disadvantage may be alleviated by tweaking the returning mirror, using a Faraday isolator or increasing the distance between the elements.

The quarter-wave scheme is naturally used in cases when a Pockels cell is placed in an optical layout which by design already features double pass sections (e.g. in linear cavities). 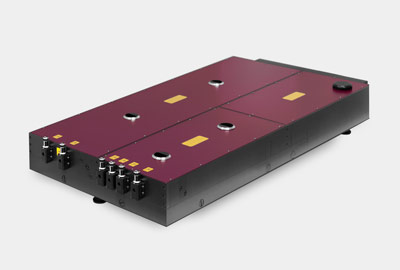 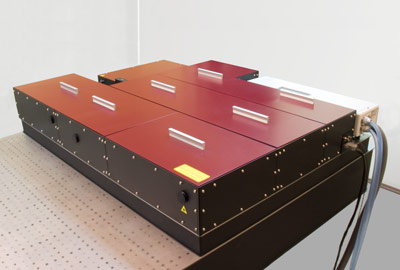